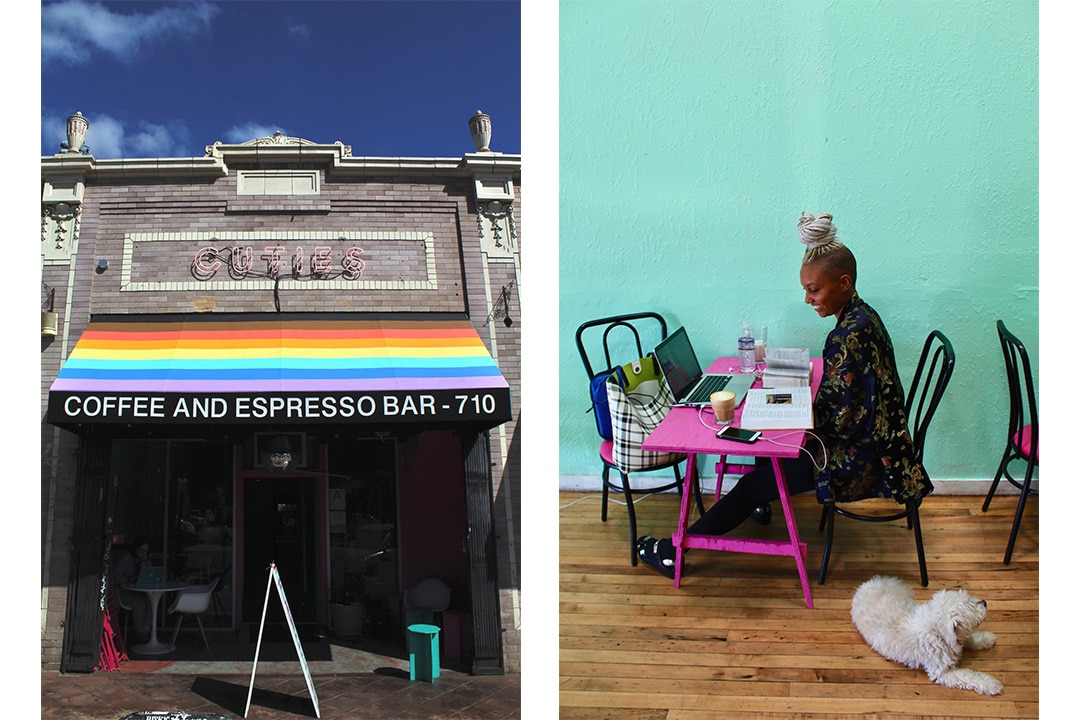 The sharp aroma of cold brew juxtaposed against the sweet smell of freshly baked salted-caramel doughnuts wafts through the air as customers step into Cutie’s Coffee. Cutie’s is nestled between an ice cream shop and a sunglasses store just down the street from Los Angeles Community College on Melrose Avenue. First conceptualized in Fall 2015, co-founders Iris Banium-Houle and Virginia Bauman opened the Cutie’s flagship location this past summer with the intention of creating a safe and accepting place for queer folks to socialize in a local community spot in West L.A. They serve pastries and fresh coffee — the donuts are from an old Mennonite recipe of Bauman’s, and the cold brew is one of their most popular drink choices, according to Banium-Houle.

Upon entering, one is greeted by a smiling barista and customers munching on treats in the LGBTQIA+ owned shop. Cutie’s provides a safe space for all genders and sexual identities, while also encouraging customers to meet one another and socialize. This is shown in the brightly colored pronoun pins sold upfront.

Cutie’s is especially notable for the full calendar of events they host. Many people in the queer community might not feel comfortable going out to a nightclub due to age, ableism or not wanting to consume alcohol, according to Banium-Houle. A fundamental aspect of these gatherings is the code of conduct, requiring consent before any type of physical contact and a “no assumption of pronouns or gender-identity” policy. In doing so, Cutie’s acts as an oasis for people of all genders and sexual identities to meet each other and drink coffee without the pressures of typical queer spaces.

“You come in and you already know so many people that are here,” Banium-Houle said. “I don’t know any other place in L.A. quite like that.”

Community is very important to Cutie’s, according to Banium-Houle. Bainum-Houle and Bauman began hosting Queers, coffee & donuts events in March 2016 at private homes in the East LA area.

“What was really nice about Queer’s Coffee and Doughnuts is we got to know our community and create space for the community prior to the location,” Banium-Houle said.

This microcosm of the vast city of LA is beloved by patrons such as Leigh Montavon. One of Cutie’s first regular customers, Montavon remarked on the uniqueness of finding a place like Cutie’s in LA.

“I love the sense of community,” Montavon said. “There’s not a lot of queer community space in LA.”

As a parent, Montavon values the importance of having somewhere she can bring her daughter. LGBTQIA+ nightlife can be daunting to those who wish to socialize more with their families due to the age requirement of 21+ for many clubs. Cutie’s offers a welcoming and safe space to those of all ages and even welcomes furry friends.

“It’s really nice to feel like a lot more sense of community, and also that’s not just based around bars and drinking,” Montavon said.

From the brightly colored teal walls to the unicorn piñata that hangs near the staircase leading to the upstairs seating, love and friendship are abundant at Cutie’s, according to Banium-Houle. Jessi Mayoral, the shop’s first full-time hire, said neighborhood commonality and belonging are quite evident in the staff.

“It’s really cool to be able to go to work and know that my gender and sexual identity is not going to be a factor,” Mayoral said.

Mayoral previously worked at a cafe in Pasadena, where interpersonal relations between staff and customers were not as prevalent as they are at Cutie’s. As the Cutie’s collective continues to grow and flourish, Mayoral looks forward to being involved not only as a barista but also as a manager of day-to-day operations.

“People aren’t just coming to get coffee,” Mayoral said. “They will actually talk to us and build relationships with us.”

With the opening of the coffee shop, Occidental students have the opportunity to engage in community involvement and activism off campus. Cutie’s is open to helping local college students facilitate and host LGBTQIA+ events of their own.

“Organize it and we would love to help facilitate and provide space and guidance,” Banium-Houle said.

Their next event is “Queer, Coffee, and Doughnuts: Boo-ties!” It will take place on Sunday, Oct. 1 from 10 a.m. to 2 p.m. and is open to the public. Cutie’s offers an off-campus community, new friends and fresh cups of coffee and pastries for all to enjoy.