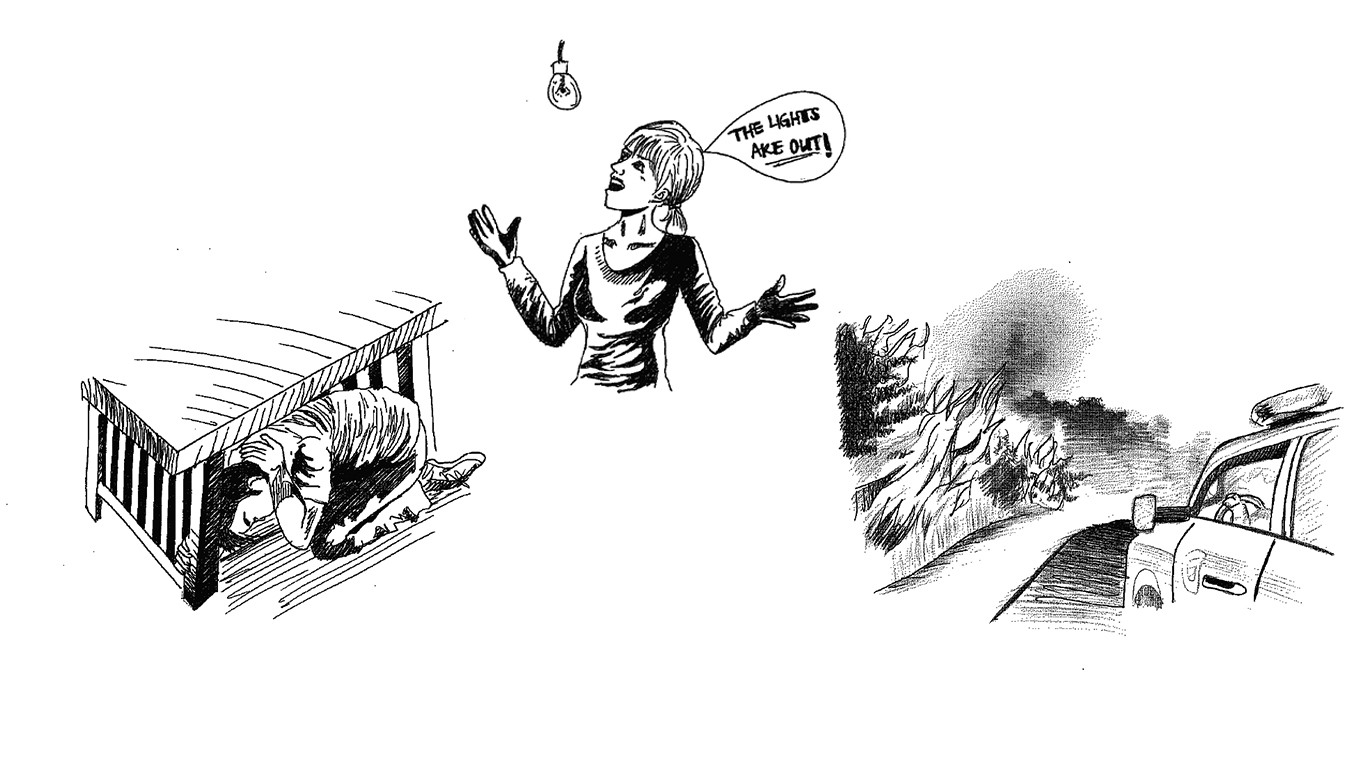 On the night of Sept. 2, Occidental College residents with air conditioning heard their AC units slowly come to a halt as their lights flickered out and the entire campus lost power. Meanwhile, the La Tuna wildfire burned so fiercely that Eric Garcetti, Los Angeles mayor, called an LA county state of emergency Sept. 3, the same day Occidental regained power. On Sept. 9, Oaxaca, Mexico was the site of a magnitude 8.2 earthquake, reminding Southern Californians of the dangerous San Andreas fault line which could spread damage throughout Los Angeles if disturbed by a large earthquake.

In the midst of this eventful week, you may have wondered how to prepare for emergency situations such as these. The Weekly set out to research Occidental’s emergency policies in relationship to power failures, earthquakes and wildfires and found the Emergency Preparedness Committee actively working to keep Occidental safe and prepared.

According to the California Integrated Seismic Network, CISN, Southern California has about 10,000 earthquakes a year. Most of these smaller earthquakes go unnoticed but they are a consistent reminder of the possibility of a pending disaster. For many out of state students, standard safety for a high magnitude earthquake is unfamiliar. Occidental prepares for earthquakes through participation in the Great ShakeOut Drill. The drill, which is an annual organized practice for quick response to earthquakes, will be held Oct. 19 for Californians. These drills are important to participate in because emergency situations can happen quickly and in unprescribed ways, sometimes making the correct response difficult to assess.

As is the case for finding the safest place on campus, which — according to James Uhrich, co-chair of the Emergency Preparedness Committee, chief information officer and associate vice president for information technology services — can vary greatly depending on the magnitude and location of the earthquake. Uhrich said the best immediate action is to stay where you are, especially if in a residence hall, where RA’s and resident staff can report your location and relay important safety measures. Within the emergency operations plan, campus safety and facilities recommend staying away from windows and exterior walls, as they are usually the first to fall. Sara Semal, director of Emmons health center, said emergency medical supplies are allocated around the campus and that Emmons staff will follow the lead of the Los Angeles Fire Dept. by helping their medics address any injuries in a triage. The most common advice for earthquakes is to “duck, cover, and hold,” but more information can be found in the “Some Common Sense Advice About Earthquakes” PDF, which is a comprehensive list drafted by Campus Safety and Facilities of campus-specific recommendations.

Within the Emergency Operations Plan, the campus employees designated to access emergency supplies for each building or location are outlined. During monthly meetings, Uhrich said the Emergency Preparedness Committee runs through practice scenarios wherein they respond to a sudden situation as effectively as possible. In earthquake training scenarios, the team assesses the damage, discusses a response plan, determines what the damage means for the operations of the college and talks to senior staff and deans about whether the space is usable.

Although students can take precautions such as avoiding on the wall structures and preparing an emergency aid kit, staying informed of more complex earthquake response tips is even more helpful.

During the recent campus-wide power outage, students received a series of text alerts from Jim Tranquada, director of communications, through the Blackboard mass notification system. Although the initial power loss occurred in Newcomb hall at 5:55 p.m., the first update to students was given nearly an hour and a half later, causing many students to worry about the immediate emergency procedures.

Resident advisors (RA) were the main source of communication for students during that time. Administrators passed down information to graduate hall coordinators (GHC) who then conveyed instructions to the RAs, according to Newcomb hall resident advisor, Quinn Taylor (junior), who was on duty during the outage.

“Communication for us RA’s started within 20 minutes of the power coming out. We were called by the GHC on duty to give a quick report on our halls to see if the emergency power was on and if the doors still worked. We were then told to keep a notable presence within the hall to address any concerns that arose and the GHC kept in constant communication with us which we relayed to our students,” Taylor said.

James Uhrich, co-chair of the Emergency Preparedness Committee, chief information officer and associate vice president for information technology services, said that one the main goals of the Emergency Preparedness Committee is to improve regular communications with the campus community. The team has discussed how to more effectively and creatively send information to students, keeping in mind the lack of immediate outreach from emails or website postings. According to Uhrich, the Emergency Operations Plan is accessible to everyone on the Occidental website and includes a basic outline, which is tweaked depending on how events proceed, for responding to emergency situations. Additionally, Uhrich said the college is equipped with loudspeakers and sirens which are periodically tested and can sound alerts and information for students without access to phones or the internet.

Text messaging is the most direct way to communicate with students who may be at various locations on and off campus during an emergency. It is also the recommended mode of communication by the SafeAmerica Foundation as voice networks can crash from over congestion and affect crucial communication between emergency personnel. In the latest emergency preparedness team meeting, Uhrich and committee members brainstormed resources such as remote charging stations and extension cords in case power outage outlasts cell phone battery.

According to Uhrich, one task the committee spends time on is assessing which buildings should have emergency power and at what level that power should be provided. Uhrich provided the example of the data center located in the library, which is connected to a generator because a power outage there would mean the loss of key services required to manage the problem of bringing power back throughout campus. After essential electrical needs are met, Uhrich said the committee works alongside facilities to determine which buildings without emergency generators should be prioritized for additional allocated power.

The Sept. 2 power failure demonstrates the way in which this prioritization occurs. Johnson Hall and Keck Theater were the first spaces given full power generators for students to use during the blackout.

“We made an assessment of where there was good emergency power, meaning good lighting for safety reasons, and what was reasonably cool because it was 100+ degrees … because it was that hot, we wanted to find a location that was cool enough for people to be comfortable and that had good lighting,” Uhrich said.

Another complication of a powerless campus is the door lock system. According to Chris Reyes, assistant director of utilities, individual locks are battery operated. However, Uhrich said that the battery backups of exterior door locks drain quickly and are set to fail in the “locked” position, meaning that no one can enter without someone letting them in.

From Aug. 29 to Sept. 1, Occidental residents received several emails from Jim Tranquada, director of communications, about power conservation in an effort to avoid power failure. The emails explained the connection between the Southern California heat wave and peaking power demands brought on by air conditioning use. The heat wave brought more than just darkness with it; for days, several wildfires spread in California and other states. One such fire was the La Tuna fire, which spread for about 12 miles and caused evacuation in places as close as 10 miles from Occidental, such as Mountain Oaks Park.

If the fire were to extend to Occidental, James Uhrich, co-chair of the Emergency Preparedness Committee, chief information officer and associate vice president for information technology services, said the college would call emergency service personnel such as the Los Angeles Fire Dept. and Los Angeles Police Dept. for assistance in properly handling the situation. Appropriate services are delivered as needed when an emergency occurs that is not localized to campus but according to Sara Semal of Emmons and Chris Reyes of Facilities, Occidental Facilities staff works alongside officials to efficiently address the needs of the students. Furthermore, Uhrich said that in the event of an air quality issue such as smoke inhalation from wildfires, Occidental would first get everyone indoors and then procure long-term sheltering for residents.

Occidental is equipped with resources such as oxygen masks and water to survive on its own for at least a short time if an emergency localized to campus were to occur, according to Semal. Uhrich said that in the case that the Los Angeles area became unsafe, but Occidental would work on obtaining more resources to bring in from outside connections. In this type of situation, Uhrich and other administration would consider how it would open the campus up for the local community to keep others safe as well.

“We are here. We do this on a regular basis and we do our best to try to be prepared to provide the services that the community needs,” Uhrich said.