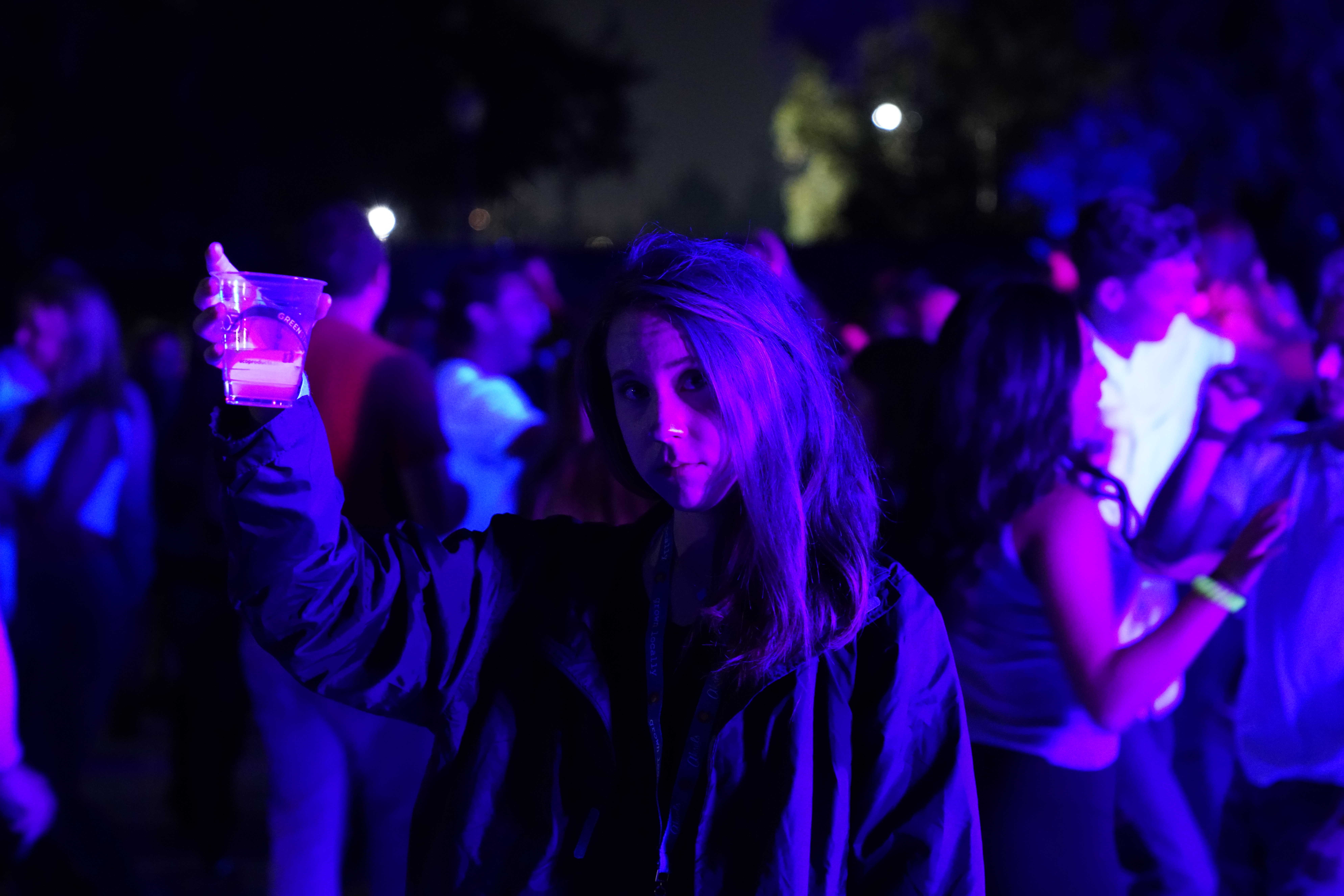 Upon learning that Programming Board planned to revive GLOW in lieu of Fall Fest this semester, I could feel my pulse quicken and blood pressure rise. I flashed back to the fateful night of original GLOW in 2013, during which I danced with a dude who carried a flip phone in the pocket of his cargo shorts and whispered into my ear that his favorite book was Moby Dick while attempting to dry hump to the musical stylings of DJ Snake. (My phone number is still in that flip phone, God willing it exists today.)

I courageously chose to cover the event as a correspondent for the Occidental Weekly. My first step was to make fake credentials for myself in the library, though ultimately I knew that the windbreaker I wrote “PRESS” on the back of would not protect me from the perils I might encounter at GLOW 2.0.

I met up with photographer Allen Li to discuss our game plan for the evening. We agreed on a “no man left behind” pact. We entered the dance at 10:30 p.m. There wasn’t a line yet, which turned out to be convenient for me since the Programming Board employee who swiped our student IDs did not seem to recognize the validity of my press pass or care that I had it.

Despite the initial sparse turnout, a throng of dedicated partygoers were already making ample use of the slick dance floor. I moved to join them and immediately tripped. The floor’s gleaming tiles were slippery enough for me to easily skate along them. I wondered if it would gain more traction throughout the evening, for the sake of all those inebriated. I left the floor when a group of girls sprinted past me to dance to a remix of “Heads Will Roll” by the Yeah Yeah Yeahs.

Spatially, people could mingle and chain smoke at little tables by the water coolers to the left of the dance floor. At approximately 11:15 p.m., Allen suddenly motioned for my attention. From our little table we could see that the line to enter GLOW stretched the length of the Marketplace and much of the academic quad. The masses had descended upon us. Allen and I braced ourselves for the frontline.

While photographing the rapidly growing line, an employee from the Office of Student Life asked Allen and I if we worked for the yearbook. I quickly flipped my press pass over to its blank side and vigorously nodded. We were given orange wristbands that read “OXY VIP,” which I saved and will most definitely find a way to abuse again at some point. Allen continued to shoot. The secret thrill of working undercover quickly wore off when two students brandishing large cameras confronted us and declared themselves to be the real yearbook photographers. Allen and I slowly backed away. Both photographers and the OSL employee gave us an accusing look and we broke into a slight jog.

As partygoers lined up, they were offered a pair of complimentary earplugs, presumably to protect themselves from any hearing damage caused by the musical artistry of headliner and Oxy Alum Aseem “Hotel Garuda” Mangaokar. Max Hornstein (junior) appeared unimpressed by the earplugs.

“But they’re neon, so at least it’s keeping up with the theme,” said Hornstein.

Programming Board staff appeared to be overwhelmed by the number of students attempting to gain entry to the dance. I offered to help moderate admission into the venue. Staff met my generosity with skepticism.

I decided to return to the dance floor when Hotel Garuda had ascended to the stage. Those in the heat of the moment seemed to be loving the music almost as much as they were loving remnants of their teenage hormones. Between seamless transitions, Hotel Garuda reminded us that he had at one point lived in the residence halls of Braun, Wylie and Bell-Young. He proudly called Occidental his alma mater, making him the first “public figure” to spend more than two years at this school.

But in all seriousness, post-grad life has been kind to you Aseem. You look great.

While definitely not scary or sinister, the crowd’s young enthusiasm was bumming me out a little. GLOW was still GLOW after all, and everyone I could observe was too preoccupied with their dance floor makeout to give me a quote, although one student did ask me what news source I represented before saying “no comment.”

In an effort to hedge my bets, I checked out the periphery of the dance before heading to the Cooler, the place where most nights go to die. The port-a-potties remained suspiciously sanitary.

The Cooler itself was bustling and had a welcoming atmosphere. No one visibly needed medical attention. I was flummoxed. The featured menu item was chicken wings with some pieces of celery.

My next priority was to get some cool GLOW face paint, another new addition to the event. Many students were sporting cute little geometric shapes and hearts on their cheeks. I requested a skull and crossbones. The staff member doing the painting frowned and immediately referred me to her presumably more goth friend. The goth friend chose neon green and proceeded to paint the entirety of the left side of my face with viscous paint. Though initially dismayed, the tattoo grew on me and I wondered if it would help me curry favor with the smokers by the water coolers.

Around 12:15 a.m. I began to observe many couples exiting the venue together, some hand-in-hand. Programming Board staff member Nikolai Birch (junior) was tasked with asking those leaving if they wanted reentry to the dance.

“Yeah, now is the time of night that I take my glasses off because I don’t want to see who is leaving with who,” Birch said. I asked him if he had enjoyed working the event.

“It’s been kind of weird but nobody got transported, so that’s good,” said Birch.

At 12:30 a.m. I shrugged and told Allen to find his friends and enjoy himself. There were only 30 minutes of GLOW left. He smiled appreciatively and told me that the dance was “lit.”

Lit as it may have been, I felt a vague and peculiar sense of ennui. Everyone for the most part seemed happy and relatively safe. Before donning my press jacket, I predicted that I’d be tempted to editorialize the event as lame or immature. But at the end of GLOW I could impart no judgement. Calling GLOW dumb does not make me smarter. May we continue to learn from our mistakes.

I was but one of hundreds of people in attendance, each living out our lives in search for the same things – to be good, to be fully alive, to connect with the basic human dignity that unites us all. These pursuits, I submit to you, are all we have.

Standing on the outskirt of the dance floor (which did eventually gain traction,) I smiled wistfully to myself. Have the dark ages of my youth passed? Is this what growing up feels like? Has the fourth and final act of my collegiate drama begun? I suspect that only time will tell.

But life is short. Until then, I raise my glass and say live, laugh, GLOW.