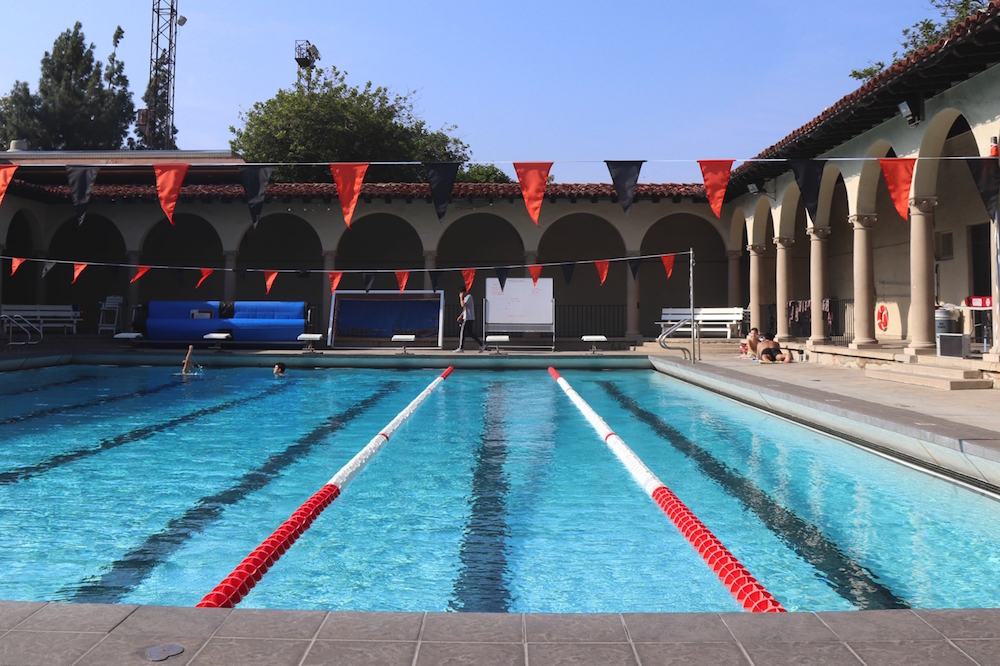 Men’s swim captain Austin Lashley (senior) said coaches first told him about the new pool when recruiting him as a sophomore in high school.

“It’s been a long time coming,” Lashley said. “There’s never been a clear timeline presented to any of the aquatics athletes, really.”

Head water polo coach Jack Stabenfeldt ’14, a former athlete on the water polo team from 2011 to 2013, said Occidental coaches promised him a pool by his junior year.

“There have been rumors since, I would say, the ’80s,” Stabenfeldt said.

Bill Davis ’80, who was a swimmer and water polo player at Occidental, recently told the Occidental Alumni Magazine that a coach promised him a new pool by his senior year.

Director of Communications Jim Tranquada said the alumni donors who contributed to the project are also former Occidental athletes. In 1995, De Mandel, a baseball player during his time at Occidental, made a $2 million estate gift toward the new pool. Jennifer Townsend Crosthwaite and Barry Crosthwaite, who played volleyball and water polo, respectively, at Occidental, have given $1.5 million toward the pool. McKinnon, former captain of the tennis team, donated $1.5 million toward expanding the tennis center. Robinson, a fellow Occidental tennis alumnus, also contributed to the tennis center.

Aquatics coaches and athletes agreed that Taylor Pool, built in 1930, is too small and shallow to meet their teams’ needs. According to Polansky, the newTownsend Crosthwaite Pool will be larger, with 15 lanes compared to Taylor Pool’s six. Head swim and dive coach Steve Webb said this will make training much easier.

“For us, it’s all about lane space,” Webb said. “It’s not possible to run one practice anymore in this pool, so we run multiple a day. We won’t need to do that anymore.”

An even more important benefit of the new pool, Webb said, is that the diving team will be able to practice and compete at home instead of at the Rose Bowl.

The De Mandel Aquatics Center — the overall structure surrounding and including the new pool — will be equipped with four diving boards and a 13.3-foot deep diving well.

“We brought in two good divers this year on the women’s side, and that’s an area where we definitely want to grow,” Webb said.

The installation of the new pool will also usher in changes for the water polo team. Taylor Pool has shaped how the team plays, according to Stabenfeldt. Aside from the problems created at home games by Taylor Pool’s shallow end, players have had to mentally adjust to larger pools in away games.

“We’re not able to schedule as many non-conference opponents at home because people don’t want to come here to play,” Stabenfeldt said. “That’ll be a big change with the new facility.”

The expansion of the McKinnon Family Tennis Center will involve adding two new courts and refinishing the current four courts. Currently, the team has to hold home matches at Scholl Canyon, a nearby country club. Head tennis coach Rachel Manasse expressed her excitement for the change.

“I think it brings a really nice sense of community when games are held at Occidental, and friends and family can just stay on campus instead of having to drive off to the country club to watch,” Manasse said.

Polansky said the new pool and renovated tennis center will be beautiful and consistent with the original architectural style of campus. Townsend Crosthwaite Pool will include a half-crescent portion designed as a recreational area — a place where the general Occidental community can swim, soak and sunbathe.

“[Moule and Polyzoides] really thought about the siting of the pool and courts relative to the entire campus,” Polansky said. “Everything is really intentional and really careful.”

According to Tranquada, the new pool’s grandstand will seat over 300. At the tennis center, Court 1 will seat 200 spectators. Its capacity will be further expanded by the inclusion of a triangular viewing patio adjacent to the courts.

“It’ll make it more viewer-friendly,” Manasse said. “Everyone loves to come to matches and see their friends play.”