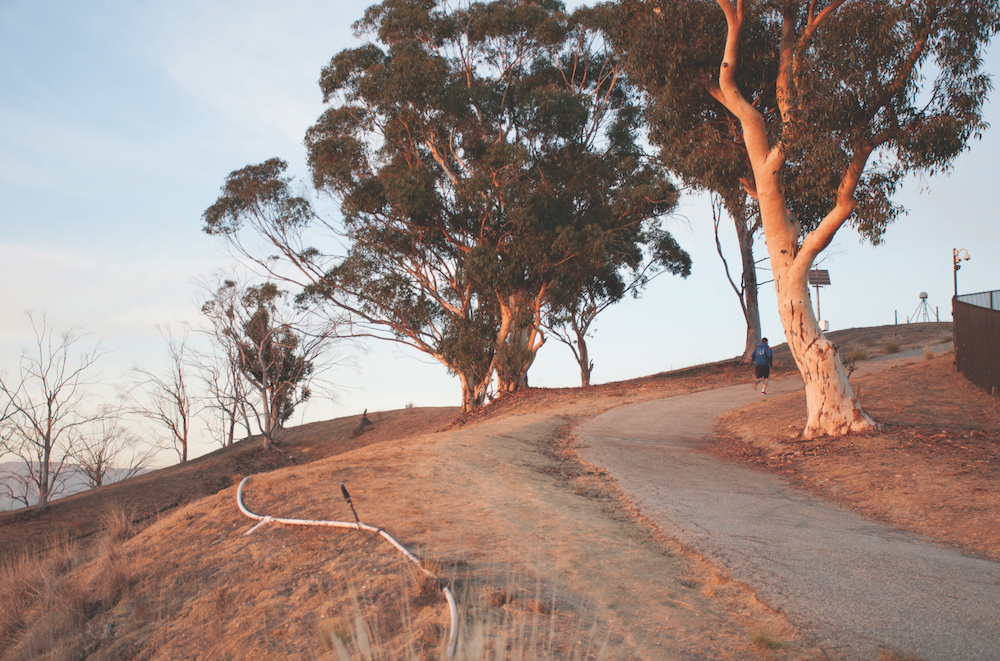 “The Fiji Restoration idea came to me last semester. I collect native seeds, press native flowers and propagate them as a hobby, and what started as a hobby became a full-blown initiative,” Diego Zapata (junior), director of FEAST, said.

According to Zapata, he collected a variety of seeds from regions across Northeast Los Angeles this past summer and began breeding them at FEAST. He said that he had amassed many seeds and that Fiji seemed like the best place to cultivate them.

“The restoration of Fiji is like my baby. I have a very intimate knowledge of native plants and propagating. I would spend my afternoons as a child in the hills of the Arroyo Seco observing flowers and trying to understand and identify them,” Zapata said.

Zapata said FEAST is involved in various efforts to bolster sustainable landscaping on campus, as evinced by its native pollinator garden near the Norris dorms. He said that the Fiji restoration stems from similar motives, but is also part of FEAST’s seminal debut as a new student service on campus.

“I see a lot of potential in Fiji. The restoration will both beautify the campus and enrich the college experience — not only in terms of having a large green space that is accessible to the whole student body. If we restored Fiji, there is a lot of room for departments to use the space as an outdoor classroom,” Zapata said. “Our ultimate goal is to restore all forty acres of the hill.”

Biology professor Gretchen North stated that she is optimistic about FEAST’s restoration project.


“I have been involved with Fiji ever since I first came to Oxy, which was in the ’90s,” North said. “I was first involved working with students to do vegetational surveys for an ecology class.”

North said that in 2015, she and her students conducted measurements of Fiji’s biodiversity to assess how the solar array — then in the planning process — may endanger local flora and fauna. The report found that wildlife on Fiji is scarce. According to North, Fiji has struggled with waning biodiversity for a long time, as several wildfires weakened the hill’s ecosystem since the campus first moved to Eagle Rock in 1914. North said that while cyclical wildfires are natural to Los Angeles’s chaparral environment, Fiji’s native plant communities could not regenerate normally once humans contributed to more frequent fires.

According to North, Fiji’s highly-eroded soil accommodates primarily large swaths of flammable, invasive weeds, which the college is legally required to mow as a fire precaution.

Alma Olavarria Gallegos (junior) is one of FEAST’s interpretative garden managers. She said that native plants become self-sufficient a year after being planted on the hill and are more resistant to long-term erosion by wildfires, both of which would help rejuvenate Fiji’s topsoil and soil saturation levels.

Olavarria Gallegos is also one of six students in UEP 246, Sustainable Oxy: Campus Greening, taught by Megan Bomba, UEPI program coordinator and FEAST’s faculty advisor. Olavarria Gallegos said that this past November, her class took inspiration from Zapata’s vision and worked to help FEAST establish a pilot plot of native plants on the southwestern side of Fiji, which currently hosts sage, lemonade berry and safe brush.

Zapata said that he hopes to plant seeds that FEAST members cultivated in FEAST’s nursery and greenhouse on Fiji’s hillside. In the meantime, these members are adopting pilot plants from a local nursery, according to Olavarria Gallegos.

“Restoration helps bring life back into the earth, and can teach us how to live more harmoniously,” Olavarria Gallegos said. “Getting the opportunity to work with the earth is a really rejuvenating way to learn for me, and working on Fiji has allowed me to be much more passionate about caring for the earth and each other.”

According to Zapata, the locations of the restoration plots are in the process of finalization. He said that FEAST has to consider various factors, such as making the space accessible to students and planting near viable irrigation sources. Olavarria Gallegos said that there is also the challenge of navigating around the eucalyptus trees near Fiji, which have bark and leaves poisonous to native seedlings.

According to College Archivist Dale Ann Stieber, the mountain is officially identified as College Hill, not Mount Fiji. Stieber said that the nickname originates in Occidental’s early Greek life system.

According to Special Collections documents, in 1926, one of the college’s first fraternities, the Owl and Key, became a formal chapter of the national fraternity Phi Gamma Delta — otherwise known as Fiji. Members of the fraternity called themselves Fijis and lived where the Samuelson Alumni Center stands today. The fraternity used to host an annual “Fiji Islander” party, where members apparently collected plants from Mount Fiji for thematic decoration. The chapter officially closed in 1970.