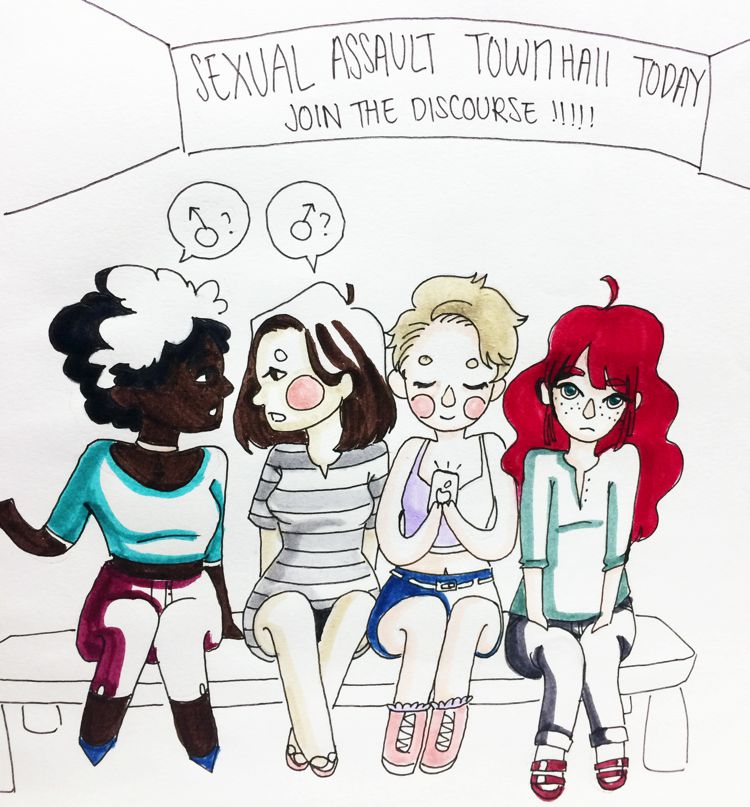 As a male growing up I felt it was my duty to defend men whenever someone complained about us as a group. I quickly added the term misandrist to my vocabulary and casually assigned it to anyone who said something less than glowing about my gender-mates. “Men are individual people who should not be subjected to generalizations,” I argued. “Maybe some behave poorly, but not all of us.” It took a few years of college courses and influential friendships for me to realize that this was neither relevant nor entirely true. My time at Occidental has helped me realize that men undeniably need to become more involved in combatting sexual violence.

According to the National Sexual Violence Resource Center, college women are three times more likely to be sexually assaulted than other adult women — one in five have experienced sexual violence, and 90 percent of rape victims are female. Overwhelmingly, the perpetrators of sexual violence against women are male. While not all men commit such heinous acts, enough do that we are largely responsible for this problem. And as this epidemic’s primary cause, it is our responsibility to remedy it.

We must begin by examining the common trends in hook-up culture at Occidental, and on campuses across the country. Occidental Professor Lisa Wade’s new book “American Hookup: The New Culture of Sex on College Campuses” illustrates how the narrative of “not asking”creates an atmosphere where disrespect predicates the act of having sex.

“It often starts on the dance-floor, where asking to dance is generally considered bizarre,” Wade said. “This begins a sexual script of not asking that holds throughout the night. The problem arises when men start abusing this script.”

Despite the passing of California’s “Yes Means Yes” law, Occidental’s annual “Think About It” course and school orientation programs that emphasize the importance of obtaining verbal consent before sex, the narrative of “not asking” still rings true at this school.

In my own conversations with 15 Occidental women, 14 stated that male students rarely asked for verbal consent from them before sex. Wade expressed that most female students she interviewed had similar experiences. Such reports suggest that it is alarmingly common for sexual encounters to proceed when consent is inferred, or at times, ignored.

The trend of “not asking” amongst males hints at a lack of respect for women. Asking is such an easy, yet important way to show someone we are considering their feelings. Intentionally or not, men end up designating their hook-up partner as inferior when they don’t obtain consent.

In some cases, men who fail to ask may also refrain from extending general decency to women with whom they hook up.

*Amber is a heterosexual female who is experienced in the hook-up culture at this school.

“Most of the people I’ve been with here have made me feel like an object,” Amber* said. “I think a lot of guys see the women they hookup with as unworthy of their respect. As a result, there’s typically a disregard for the woman’s pleasure during sex, and then a discarding of the woman after sex.”

This disrespect for women within hook-up culture largely stems from the “toxic masculinity” to which males are constantly subjected. Toxic masculinitydescribes the masculine role as dominant, unemotional and sexually aggressive. It’s expressed every time a little boy is told to “be a man,” or “men don’t cry,” — mantras that mold emotional, caring boys into hardened, violent men.

Toxic masculinity is pervasive in males’ interactions. Wade says men who exhibit this type of masculinity pressure other males to hook up with women, but then ridicule them for hooking up with girls who are not considered desirable.

“One way for a guy to handle his reputation with other men is to treat some girls poorly,” Wade said. “This way he can admit that, yes, I hooked up with an undesirable girl, but I treated her like [expletive] on behalf of all of us.”

We men must recognize that we are attacking and abusing other human beings, and it needs to stop. By making a simple commitment to asking permission, we can start to reverse this trend. After all, asking does not make us weak, awkward or less masculine; it simply shows that we have a basic level of respect for the person with whom we are hooking up.

It is time for us to stand up to other males who shame men for being emotional, avoiding conflict or treating women well. As difficult as it can be to speak up, remaining silent only fortifies the ideals of toxic masculinity — a narrative that is destructive not just to men, but to all human beings.

Jamie Stevenson is a senior Psychology major. He can be reached at jstevenson@oxy.edu.