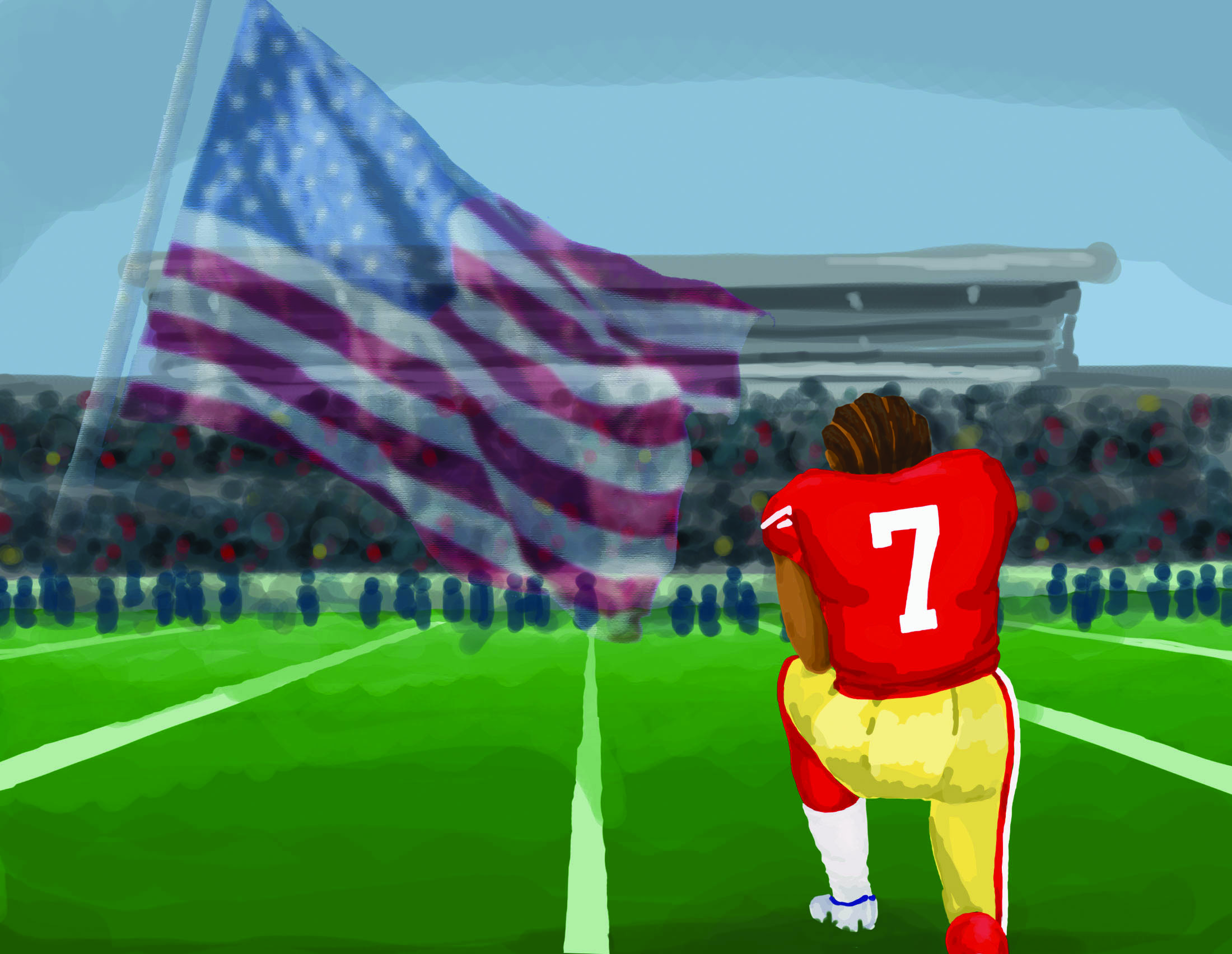 The use of “The Star-Spangled Banner” at sporting events dates back, on record at least, to the early 1900s. Because the United States had recently entered World War I, it was common for “patriotic” acts to occur during baseball games. This became so popular that in Game One of the 1918 World Series between the Boston Red Sox and the Chicago Cubs, the band broke into “The Star-Spangled Banner” during the seventh inning stretch. The impromptu song was an instant hit, and the rest — as they unfortunately still say — is history.

At the time, the national anthem was a symbol of patriotism for a country who had just entered what was then the largest war in history. People were afraid, and rightly so, because, for most, the violence erupting in Europe was something they had never seen before, and something many could not comprehend.

That is relevant today because context matters — especially when our nation is divided over whether or not the national anthem should be respected.

Patriotism is not something we should let cloud our judgment, especially when it comes to issues in our country. When someone’s love for their country threatens those who believe the country needs improvement is when patriotism becomes an issue.

The protests from various athletes are not meant to disrespect anyone in the military, or anyone at all for that matter. They are taking place because there is a clear racial bias in this country and police brutality is one of the most pervasive issues. It is baffling to me that people can question the validity of a protest against racism in this country, a country in which it is impossible to deny that racism exists.

Recently, President Trump has taken issue with professional football players protesting the national anthem. Whether it be taking a knee or raising a fist, players have voiced their displeasure with the ways in which this country has recently handled racial issues. Two Sundays ago, the NFL responded to Trump’s criticisms with a show of solidarity, during which hundreds of players took a knee and locked arms with coaches, and on some occasions, owners, during the anthem. Trump, never to be caught on the back foot, was quick to tweet his “approval” of the demonstration, while still throwing in some jabs at the NFL.

The issue many (including our exceptionally articulate president) have with the protests is they believe it is disrespectful to American soldiers who have died in battle. A common, misguided argument often thrown around on social media is “they fought for your right to stand!” This statement does not tell the full story. Our soldiers have fought and died for many of our rights as Americans, among these being the freedom of expression. They fought for our right to be able to choose whether we sit, kneel, laugh, cry, clap, cheer, giggle or anything else we might see fit to do during the anthem.

Many seem to forget this, no matter how much they love the First Amendment. These players have the right to kneel during the national anthem and they are simply exercising that right, just as any American can exercise their right to own a firearm. Gun regulations are “un-American,” but censorship is not?

Speaking of things people seem to forget, taking a knee was not Kaepernick’s original protest; initially, he sat on the bench during the national anthem. However, after former Green Beret and Seahawks’ player Nate Boyer told Kaepernick it would be more respectful to those in the military if he were to kneel rather than to sit during the anthem, Kaepernick began to kneel instead. How can Kaepernick disrespect the military if he changed his form protest at the suggestion of — and out of respect for — a former service member?

If that isn’t enough, even without the protest, there are plenty of elements of the pre-game national anthem ceremony that disrespect the flag. The spreading flat of the flag and the suspension of the flag from any and all movement are strictly against flag etiquette, according to the Department of Veterans Affairs. If I am not mistaken, people carry the flag while it is flat and taut at nearly every football game across the country. This means before Kaepernick even thought about taking a knee, we were already disrespecting the flag. Far be it from me to point out the hypocrisy of it all, but I just thought I might lay it out for others to make the connection.

If this country is ever to improve and become equal for all, we as a community — both at this school and across the country — must continue to create a discourse in favor of inclusion and equality. If we do not, who will?

Sam Hajduk is an undeclared sophomore. He can be reached at shajduk@oxy.edu.