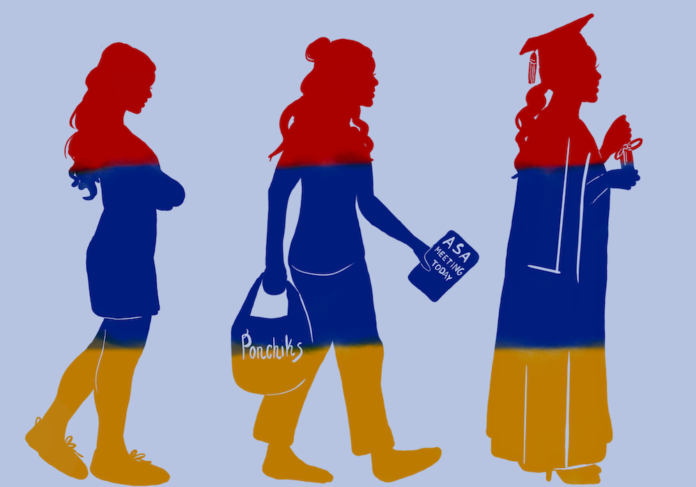 A bright-eyed eager first year walks onto campus, not seeing any red, blue and orange flags, not seeing anyone that looks like her and definitely not smelling the Armenian cheese boureg. Sure, I might have predicted that this would happen. But, while I was taking in the new environment, I also had more jarring interactions where several students asked me, “what is Armenian?” Not only did I not know how to react, but I was also just scared for what my time in college would be like if I didn’t have the familiar comfort of people who share my background, culture and history.

I grew up in Armenian schools and in the Armenian community, where language, history and traditions are introduced to you from the moment you are born and again when you first start school. We had separate class periods for Armenian language and another one for Armenian history, from preschool to 12th grade. I was surrounded by Armenian people every day, whether that was in school or in the social events I would attend. Then, all of a sudden, I walked into a new space where people essentially asked me who I am. I struggled with how I was going to explain my identity to someone who had never even heard of the country. How would I explain everything there is to know and do my people justice? I was a stranger in my new “home.”

This feeling should not be familiar. During my first two weeks at Occidental, I was waiting in line at the Green Bean when I noticed a student waiting for her drink who had an Armenian flag on her laptop. I quickly approached her in absolute excitement: it turned out, she would be my editor-in-chief at the newspaper that semester. She told me that the Armenian Students Association (ASA) had not been active in a few years. I continued to feel unsettled at Occidental until my roommate and best friend Lara Minassians, who was one of the two Armenian people I had found on social media before coming to Occidental College, and I decided to reactivate the ASA. The rest was history.

Lara and I reactivated the ASA Occidental Chapter in 2018 and created a community for Armenian students and for educating others about the Armenian culture. Since creating the ASA, I have not felt like a stranger in my own home; Oxy finally became a home. There is a reason I felt the need to reach out to Lara on Facebook or run up to the Armenian student at the Green Bean. Speaking from experience, communities of color tend to create their own communities in larger spaces in order to prosper in their own identity. It is a sense of family and culture that is necessary for many community members to feel a sense of belonging.

However, these community spaces may not always be present, so we need to create them for ourselves. If we do not, nobody else will. We may not always be represented in the classroom, the workplace or the media, so we must fight to represent ourselves. Build that community for you and your people if one does not exist. When there was no Middle Eastern and North African (MENA) cultural graduation or spaces for MENA students, we worked to create one: the first such cultural graduation celebration that has since begun a college tradition. Even then, with establishing this community and educating the campus, some things will not change quickly. People still question which “boxes” we fall under. They will challenge our history and tell us who we should be: European or white or Middle Eastern. Often, saying I’m Armenian is also received with a “that’s so cool” or a “you’re so ethnic.” These problems exist, but confidently claiming who we are is how we should begin to address these injustices. When we start the uncomfortable act of representing ourselves and our people, we open a door that will stay open when we leave one day. This is why it is important to create community spaces in the places that may otherwise leave us to assimilate.

No one at Occidental asks me what “Armenian” is anymore. In fact, people know about the Armenian Genocide and other parts of our culture. Our ponchiks even became famous on campus. I leave Occidental knowing that the community and the presence of ASA will continue to live on without my or Lara’s physical presence. To all of you who are a part of my community and to those who have been here during these four years to learn more about who we are, thank you. Peace and Love. Խաղաղութիւն եւ Սէր։