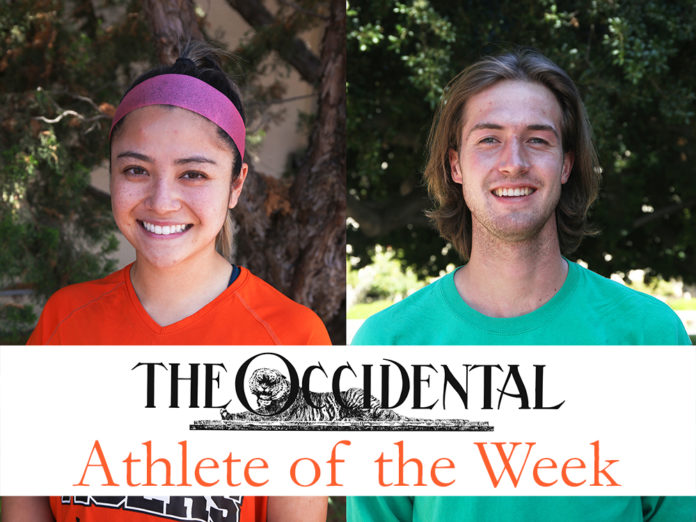 Austin DeWitz (senior) ran a time of 15.59 seconds to win the 110-meter hurdle race and post the fastest time in the Southern California Intercollegiate Athletic Conference (SCIAC) this season at the third SCIAC Multi Dual meet April 13. DeWitz swept all three of his events with wins in the triple jump and high jump, earning him the SCIAC Field Athlete of the Week award. DeWitz said it is exciting to be hitting his stride in something that is not his primary event as the season nears its apex.

“I spent the last three years running the same exact time, like a low 16, and I was never able to break the 16-second barrier,” DeWitz said. “But for the first time since my senior year of high school, I’m back under 16 seconds and it’s just clicking.”

DeWitz attributed his nearly half-second personal record to his teammate, Andrew McCall (senior), whose friendly competition pushes him to strive for even faster times.

“I’ll say [to McCall], ‘The only reason I PR’d is because I saw you in front of me,’ DeWitz said. “We love it, we get super hyped up about it before and after [the race]. If he beats me, I’ll hear about it until the next meet, and I make sure to do the same to him.”

High jump coach David Foley said the commitment, passion and drive DeWitz has demonstrated for the sport has positioned him to finish his final season by potentially securing his third conference championship in high jump.

“I think he’ll be remembered as someone that worked really hard but didn’t take himself too seriously, which is about all you can ask for as a coach,” Foley said via email. “The secret to being good at track and field is finding that balance of wanting to do well but having fun while you do it. Austin has always been great at that, and his energy and enthusiasm are infectious for his teammates.”

Regarding the upcoming SCIAC Championship Meet April 27 and 28, DeWitz said he is prepared to lay it all on the line to help his team topple first and second place conference leaders University of Redlands and Claremont-Mudd-Scripps (CMS).

“I don’t want to leave anything out there, I’m not trying to let some other young kid in the conference take it from me, I’m trying to close it out with another win in [high jump] for sure,” DeWitz said. “I had no expectations coming in this season for hurdles or triple jump, and kind of being in the position that I am, it’s just like, why not let it fly, why not go for it?”

In addition to his track accolades, DeWitz is a team captain for the Occidental men’s basketball team and has been named First-Team All-SCIAC for basketball the past two seasons.

Madisyn Hallare (senior) was named SCIAC Lacrosse Offensive Athlete of the Week following a two-game winning streak against Pomona-Pitzer and University of Redlands, during which she had a combined five goals and 10 ground balls. In a rematch versus second-place Pomona-Pitzer April 10, Hallare led all players with 10 draw controls and scored the first of five Occidental goals that were unmatched by Pomona and resulted in a 13–12 comeback. According to Hallare, stepping onto the field each game with an assertive mindset contributed to her dominance during this winning series.

“I totally believe if you go into the game thinking ‘I am the best player on the field’ or the court, or wherever you’re playing, you will be successful,” Hallare said. “I don’t think I always had that mentality, but this year, I think the reason why I’ve had more success is just because I’ve been super confident and being like ‘That’s my ball, I’m going to go get it.’”

Co-captain Shai Goodman* (senior) said Hallare’s presence on the field has a way of synchronizing the team’s collective energy and effort, which proved to be instrumental in the close win against Pomona-Pitzer.

Transitioning from a defender during her high school career to a midfielder as a collegiate lacrosse player, Hallare said becoming more confident and attack-minded in her gameplay has been a focal point of her development.

“On the technical side of things, I’ve really been working on shot placement and being really smart on attack, working on the draw control,” Hallare said. “Even though I’m smaller compared to most lacrosse players, I’ve just been trying to make up for that with my speed and my scrappiness.”

In addition to her ferocity on attack, Hallare said she takes pride in her capacity to tailor her leadership style to each player she hopes to influence, ultimately aiming to help these players believe in themselves and their abilities.

“I think something I’m proud of this year is just how I’ve been more of a leader and a lot more vocal,” Hallare said. “I feel like I know how to rally players based on their specific, individual needs and what gets them fired up.”

Hallare is a sociology major and English minor, and if she could choose an ideal SpringFest performer, she would like to see Gwen Stefani.

*Shai Goodman writes for The Occidental.